Dr. Peat has commented negatively on melatonin supplementation, citing its suppression of metabolism and body temperature. Melatonin has been shown to correct delayed sleep phase syndrome (DSPS), a disturbance of the circadian rhythm, deviating from the normal 24-hour sleep cycle.Melatonin regulates and corrects DSPS, but in the vast majority of cases, the sleep cycle reverts back to its previous disturbance. Regular or infrequent administration of melatonin on an ongoing basis as needed can restore order to the circadian rhythm. Melatonin also treats insomnia, such as that brought on by stimulant use, as with caffeine.
The take-away from the following studies show that melatonin dosages above 300 mcg can be harmful, suppressing one’s body temperature and elevating melatonin levels for the following day. Even dosages of 300 mcg seem to be necessary only in the elderly, and dosages of around 100 mcg and less minimize the harmful effects associated with higher dosages.
This study in the Proceedings of the National Academy of Sciences showed that dosages of 0.1 mcg significantly improved measurements of sleep quality and reduced the time to fall asleep (sleep latency).
“In summary, administration of a small melatonin dose (0.1-0.3 mg, p.o.) during the daytime, which raises serum melatonin concentrations to within the normal nocturnal range, or of slightly higher doses (1.0-10 mg, p.o.) was shown to cause hypnotic effects relative to placebo. These effects include a decrease in objective and self-estimated sleep-onset latency, an increase in sleep duration, and sleepiness upon waking. Self-reported feelings of sleepiness and fatigue were increased and feelings of vigor diminished. Oral temperature and the number of correct responses on the Wilkinson auditory vigilance task were found to decrease significantly after ingestion of 1.0 and 10 mg of melatonin. These results are similar to those reported after ingestion of benzodiazepines and suggest that melatonin may find use as a hypnotic drug. They also suggest that the normal physiologic secretion of melatonin may be an important and direct-acting factor in bringing about sleep onset.” 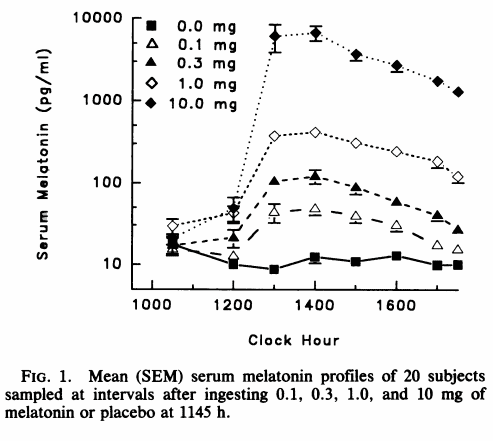 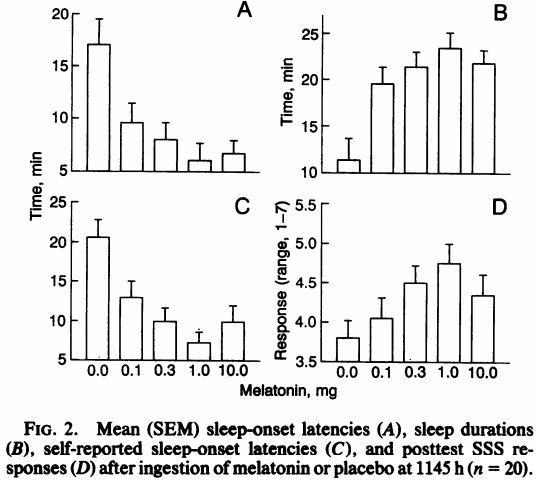 Reference: Dollins AB, Zhdanova IV, Wurtman RJ, Lynch HJ, Deng MH. Effect of inducing nocturnal serum melatonin concentrations in daytime on sleep, mood, body temperature, and performance. Proc Natl Acad Sci USA. 1994 Mar 1;91(5):1824–8.​
Researchers in The Journal of Clinical Endocrinology & Metabolism studied the effects of melatonin in the elderly, specifically those over 50 years of age with age-related insomnia and a subsequent degradation in their sleep quality.
“SLEEP-WAKE TIMING IS REGULATED BY THE BIOLOGIC CLOCK IN A CIRCADIAN RHYTHM: A RHYTHM CONSISTING OF APPROXIMATELY 24 HOURS. Entrainment of the biologic clock is achieved by environmental light. The endogenous rhythm of melatonin production by the pineal gland is regulated by the suprachiasmatic nucleus and is suppressed by exposure to bright light. Endogenous melatonin starts to rise in dim light (the so-called dim light melatonin onset [DLMO]), normally between 19:30 and 21:30 in adults and between 19:00 and 21:00 in children 6 to 12 years of age.1 This DLMO can be determined for each individual, and it characterizes the individual’s circadian timing.
Delayed sleep phase disorder (DSPD) is a problem in which the circadian clock is entrained in the 24-hour rhythm but at a delayed phase angle.2 This can result in sleep- wake timing that is late with respect to societal norms.1 It has been estimated that approximately 10% of patients with chronic insomnia have DSPD.3
Treatment of DSPD relies on the use of chronotherapy or, in other words, the shifting of sleep-wake schedules4 using carefully timed “morning” light administration5 to phase advance the clock and “evening” melatonin treatment to advance the clock.6 Based on the principles of chronobiology, effective treatment is entirely dependent on the correct timing of light and melatonin in relation to the circadian clock (circadian phase).7
Some characteristic circadian clock times are wake time, defined as circadian time 0 and DLMO, which is classically defined as circadian time 14,8 the time at which a melatonin level of 10 pg/mL is attained in the blood. This level was chosen during a period in the past when blood melatonin levels lower than 10 pg/mL could not be detected. Later, when the lower limit of quantification dropped, it was possible to measure lower melatonin levels in both blood and saliva. Salivary melatonin levels appear to correspond with 30% to 40% of the melatonin level in the blood. Consequently, salivary DLMO has been defined as the time at which 3 pg/mL or 4 pg/mL is found in the saliva. Nowadays, it is possible to measure salivary melatonin levels of 0.5 pg/mL or even lower, which has led to different definitions of DLMO.9–11
All of the studies in which the effects of melatonin have been observed determined the shift of DLMO after an intervention; in these studies, this measure was not influenced by the method of determination. Nevertheless, in the included studies, the traditional method has been applied.
When exogenous melatonin is administered, it functions as a chronobiotic drug with hypnotic properties.12 Exogenous melatonin is currently under investigation as a potential treatment for DSPD.13 Previous studies have shown exogenous melatonin to shift the internal biologic clock8,14 in addition to eliciting direct soporific effects that occur mainly during the daytime when endogenous melatonin levels are low.15
The chronobiotic mechanism becomes apparent when depicting the shift of the biologic clock as a phase-response curve. Changes from baseline are plotted as an advance or delay of sleep. Studies that examine phase-response curves support the circadian-phase effectiveness of melatonin by showing a persistent effect upon the sleep profile after a washout period of 24 hours following cessation of melatonin administration.16 The cessation of melatonin therapy in adults with DSPD results in the delay of sleep onset and a return to pretreatment values within a few days to 1 year.17,18 In the children who had sleep-onset insomnia and who took melatonin, the drug holidays lasting 1 week resulted in the former sleep problem returning in more than 90% of the cases.19 This suggests that the chronobiotic effects of melatonin can only be sustained through continued use, although the need to advance sleep onset did disappear in 8% of the children who had received treatment19 during a 4-year period.

The greatest advancement can be observed when melatonin is administered 5 hours prior to both the traditionally determined DLMO (circadian time 9)20 and the threshold-determined DLMO.21 Delays are registered when melatonin is administered between 6 to 15 hours after DLMO.1,8,13,22,23
In addition to when the drug is administered, the dose of the drug may also play a role in the effectiveness of melatonin. When the dose is too low, no concrete effects will occur; when the dose is too high, the chronobiologic effects may be lost, and only the somnolent actions remain.24,25 Recently, an association between time of administration and dose of exogenous melatonin in relationship to to endogenous melatonin onset was demonstrated.21 Given that melatonin has a very short elimination half-life in most individuals (between 35 and 45 minutes),26 it is quite plausible that very low doses (i.e., 0.5 mg or less) administered relatively early (i.e., 5 hours prior to DLMO) will have already been cleared to subphysiologic levels before endogenous melatonin onset occurs, and, hence, no shift of DLMO will be observed…
Results
No significant increases in sleep efficiency were observed after subjects with normal sleep received any dose of melatonin (Fig. 1A and Table 1). In contrast, the sleep of insomniac subjects was significantly improved by all three melatonin doses, with the 0.3-mg dose causing the greatest effect (P < 0.0001) (Fig. 1B and Table 1). This change in overnight sleep efficiency was principally due to increased sleep efficiency during the middle portion of the nocturnal sleep period (P = 0.018) and, secondarily, to improvement during the latter third of the night (Fig. 2). The sleep efficiencies of insomniac subjects were normal during the first third of the night and were unaffected by melatonin during this interval. Melatonin had no behaviorally significant, dose-related effects on total sleep time; number of awakenings; latency to sleep onset; latency to REM sleep; or percent time spent in any of the sleep stages in insomniacs or normal sleepers. 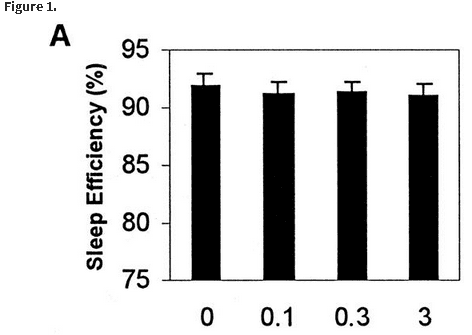 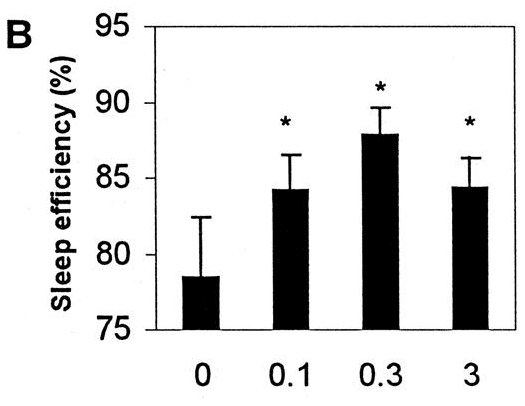 Sleep efficiency in subjects with normal sleep (A) and age-related insomnia (B) following melatonin or placebo treatment.* , P < 0.05. 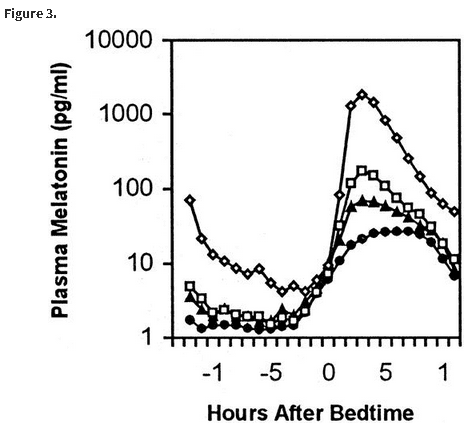 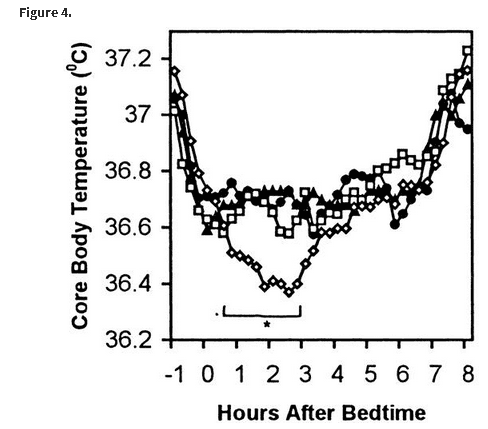 Core body temperature profiles following melatonin or placebo treatment. Circle, placebo; triangle, 0.1 mg; square, 0.3 mg, diamond, 3 mg. *, P < 0.05.
Discussion
The results of this study demonstrate, for the first time, that physiologic doses of melatonin that raise plasma melatonin to levels within its normal nocturnal range (i.e. 60–200 pg/ml) can significantly improve sleep in people suffering from age-related insomnia; that bedtime melatonin treatment does not modify sleep efficiency or alter sleep architecture in older people in whom sleep already is normal; and that the major effect of the melatonin treatment we provided is observed during the midportion of the nocturnal sleep period. This study in aged insomniacs also found that, similar to ours and others’ observations in young healthy individuals (5–9), pharmacological doses of melatonin do not increase the sleep-promoting effects of melatonin above those achieved by physiological doses and might even be less effective. Moreover, the pharmacological dose that we used (3 mg) was associated with a significant decline in core body temperature, but the physiological doses (0.1 and 0.3 mg) had no such effect. This confirms that although nocturnal hypothermia is induced when plasma melatonin is raised to supraphysiological levels, this decline is not a prerequisite for melatonin to promote sleep (5).”

Doctors often prescribe trazodone for insomnia, as it’s one of the strongest hypnotics (sleep-inducers) and lacks many of the negative effects associated with antipsychotics (as with quetiapine [Seroquel] including neuroleptic malignant syndrome and metabolic syndrome.) Gabapentin has been shown to be superior to even trazodone for insomnia:

“Alcohol-dependent outpatients with persisting insomnia were treated with either gabapentin or trazodone. Patients were assessed at baseline and after 4 to 6 weeks on medication using the Sleep Problems Questionnaire (SPQ). Of 55 cases initially treated, 9% dropped out due to morning drowsiness. Of the remaining 50 cases, 34 were treated with gabapentin (mean dose ± SD = 888 ± 418 mg) at bedtime and 16 were treated with trazodone (105 ± 57 mg) at bedtime. Both groups improved significantly on the SPQ, however, the gabapentin group improved significantly more than the trazodone group. Controlled studies are warranted to replicate these findings.” Reference: https://www.ncbi.nlm.nih.gov/pmc/articles/PMC2967491/

Gabapentin promotes REM sleep and has some serotonergic effects (which can oppose the effects of certain stimulants taken up to bedtime, such as caffeine.) It’s fairly safe but can result in severe respiratory depression when paired with other CNS depressants.

Gabapentin has one of the highest self-reported ratings of any drug used to treat insomnia, where it helps users fall asleep and stay asleep. Users report restful and restorative sleep.

Progesterone has hypnotic effects without many of the negative side effects associated with gabapentin.

Why You Should Think Twice About Supplementing Minerals

How Vitamin B3 Can Replace for Benzodiazepines